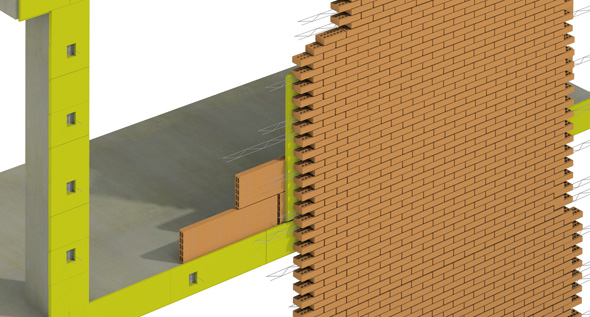 A construction system consisting of enclosures whose thickness completely crosses in front of the structure, with a horizontal mortar joint being the only indispensable requirement.

As with conventional enclosures, they have to be designed to withstand vertical and horizontal forces.

Two types of façades can be made:

The only difference between one and the other is the inclusion of a continuous ventilation cavity.

We trusted the GHAS system to give the shopping mall its shape, honouring the industrial icons of the middle of the 20th century, but through the use of 21st century structural systems. […]

For the Theatre / Auditorium in Llinars del Vallès (Barcelona-Spain), Steel for Bricks’ technical department worked hand-in-hand with the Álvaro Siza studio and clearly committed to the GHAS system in this project. […]

Find out how we united the performance of Geoanc® and our bed joint reinforcements at the Citizens’ Participation Centre in Alcantarilla (Murcia-Spain). […]

Construction of the façade for 14-storey tower blocks in Villaverde (Madrid-Spain) maintaining the balance between saving and efficiency. […]

Our technical department is at your disposal

If necessary, and with the aim of ensuring maximum safety and peace of mind in the use of our products, our technical department is at your disposal to advise you on the correct calculations and dimensions of the products.